Game 3: Keys to Getting on Track

The last time the Nets were on their home floor, they faced a must win against the Orlando Magic, and pulled out a 101-88 victory. The Nets now face a must win today against the Atlanta Hawks, as they trail 2-0 in their first round series. Historically, 3-0 deficits have signified a death knell in the NBA playoffs, and the Nets simply cannot afford to go down 3-0 if they want to make this a series.

Here are some keys to the game.

The key stat on Deron Williams this series is one that has not been discussed. The Hawks, according to NBA.com Stats, have 64 points in the series off 37 Jeff Teague and Dennis Schroder drives to the basket. Keep in mind, those figures do not include the secondary assists either player has produced this series.

Deron Williams has just five drives to the basket this series. Five. Add Jarrett Jack, and they combine for 18 drives. That has produced a total of 37 points for Brooklyn: 24 points from Jack and 13 from Deron.

So in a series where Brooklyn has lost two games by a combined 12 points, they have been outscored by 27 points off production through the dribble drive. And keep in mind: these figures do not encompass secondary assists.

Take a look at this image to see what the dribble drive can do. 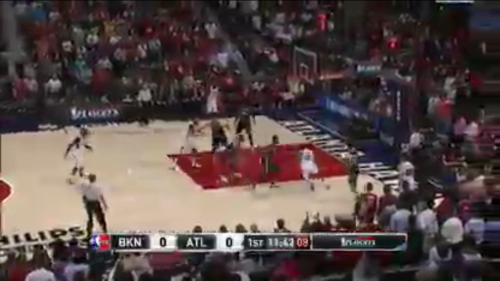 Teague is in the lane here as a result of a dribble drive. The Nets defense which started the possession prepared, is now scrambling. All 5 Nets are in and around the paint. Teague hit a layup here but if he was forced to pass, Korver Millsap and Carroll were all open.

This is something Deron has not done enough of since the Nets beat the Wizards at home to solidify its playoff standing.

Take the picture below as an example of issues the Nets can cause if Deron has his head on straight. 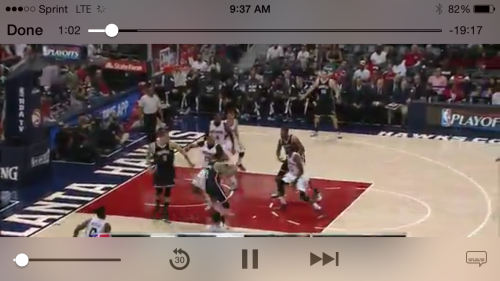 Since he got to the middle of the lane, he has created an opening. 4 Hawks inside are guarding 3 Nets, and Bogdanovic and Joe are open from 3. Have them take these 3’s, instead of asking them to isolate and create for themselves, will help Brooklyn tremendously.
DERON WILLIAMS: DISAPPEARING JUMPER

If you are following the Rajon Rondo saga in Dallas you likely have noticed a common theme emerge. Point guards who cannot shoot are liabilities at worst, and hindrances at best.

Deron is shooing 33% in the playoffs thus far and that simply will not get the job done for the Nets. Deron’s percentage on pull-up jumpers? 0%. Zero percent!

It is true that the goal on an offensive possession should be to produce a dunk, layup, free throws, or a corner three. The midrange, and guards pulling up, is not optimal, and should not be the goal when running a set.

So, should the Nets try to shoot midrange jumpers? Definitely not. But the ability to hit them, when necessary, has value. Take a look at this Atlanta set:

Brooklyn does a good job here of defending Teague in the pick and roll. Deron recovered well on Teague’s backside. Shooters were covered. Brook dropped back to contain a dribble drive. Teague scored anyway because he hit this midrange jumper.

Hitting the midrange jumper forces teams to respect your shooting ability, which opens other avenues. If Brook steps up to Teague to take it away he may get blown by; if a defender steps in another Hawk is open.

Deron not hitting his jumper is a problem. Atlanta has no reason to respect it, which hinders his ability to drive to the hoop, which prevents him from breaking the defense down in all the ways mentioned above.

BROOKLYN HAS TO KNOCK DOWN SHOTS

Effort is all well and good and is a necessity to winning in the playoffs. However, imagine effort as the price of admission. You have to give top level effort to have a chance, but because every team is good and every team is playing with effort, your giving effort, while required, does not guarantee anything.

According to NBA.com stats, the Nets are fifth in the playoffs at percentage of wide open shots taken in the playoffs (a defender within 6+ feet).  That is not a bad figure, but the Nets are shooting just 28% from 3 as a team, and that will not get the job done. In particular, Joe and Bogdanovic are under 28% from 3 and those numbers just will not cut it for Brooklyn.

Does Deron need to create more opportunities for the Nets as its lone playmaker off the bounce? Yes he does. But the players around him also need to knock down the looks. When the rubber hits the road, the Nets will not run the Hawks out of this series. They will need to prevail in close games, where a make or miss here or there makes all the difference in the world.

This entry was posted in Analytics. Bookmark the permalink.